Review of "Court of Foxes" by Brian Lux

Young readers will be immediately drawn to thirteen-year-old Bryn as he suddenly finds his life turned upside down by a move to a small Welsh village where adults and children are not eager to welcome outsiders. Deep within the ancient Welsh village of Morredin lurks an evil that no one talks about.

When Bryn starts having strange dreams, sees people and animals that are not there, and hears voices, he has only two confidants: his dog Cadno (Welsh for fox) and Selwyn, a mysterious man that villagers avoid. It is Selwyn who knows that Bryn has been sent to Morredin to deal with the evil that inhabits the village and the Court of Foxes.

Bryn alone must make the choice that will condemn or save the village and himself, a choice that faces each of us at some point. And, sadly, young people today are not immune to difficult choices like Bryn faces.

Court of Foxes is a fast paced story that will keep young adults and adults intrigued until Bryn’s reckoning at the end. The believable situations that Bryn’s finds himself faced with will hit home for many young readers.

Lux sets readers down in Morredin and immerses them in the Welsh culture. Welsh language is sprinkled throughout the novel, and the reader experiences some of the same frustrations as Bryn in trying to pronounce and understand the language.

Young readers may stumble over the Welsh words and the British vocabulary that is unfamiliar, but that should not disrupt the flow of the story. For example, the word ‘biro’ (pen) appears often, but can be defined in context. All just part of the excitement in reading a story from a foreign author. If you or your young reader read the American editions of the Harry Potter series, then you missed the British vocabulary.

I thoroughly enjoyed reading this. The mystery and suspense kept me turning pages right to the end. Young readers should find this interesting.

Brian's book is available from Amazon.com
Posted by ccarpinello at 09:29 No comments:

2010 Bring Adventures for Readers and Myself 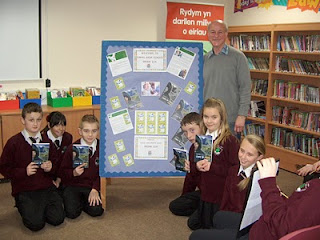 Here’s hoping that 2010 brings you and your young readers
many happy adventures between book covers.

As for me, I want to give you a preview of what is coming
for 2010 and some of the books I will be talking about.

2010 promises to be exciting for followers of author Rick
Riordan. In February 2010, The Lightning Thief
starring Percy Jackson will debut on the big screen. Pierce
Brosnan, Rosario Dawson, Catherine Keener and Uma Thurman
will be bringing Riordan’s Greek mythology tale to life.
And, In the Fall of 2010, Riordan’s new series, a Camp Half
Blood spinoff, will debut.

Riordan will continue his mythology focus with his next
series based on Egyptian mythology. The Kane Chronicles,
Book One: The Red Pyramid debuts in May of 2010. It
will introduce young readers to Carter, 14, and his sister,
Sadie Kane, 12, who are descendants of Egyptian magicians.
They will take on Egyptian gods released by mistake in the
present. I know I can’t wait to read it.

John Flanagan’s Book 7 of The Ranger’s Apprentice
series is out now. Erak’s Ransom went on sale January
5, 2010. I have to get busy because I still have Book 6 to
read!

In future blogs, I will review a little older series set in
Medieval Times by Lloyd Alexander. The Chronicles of
Prydain has recently been reissued in paperback. I’m
working on Book 1, The Book of Three. I think young
readers will be excited about this series.

I am eagerly awaiting the arrival of a review copy of the
Welsh children’s author Brian Lux. His publisher is
currently working on getting copies of his books into the US
market. Court of Foxes, set in Medieval Wales is
currently on its way to me. I’ve included a picture Brian
sent of Welsh school children showing off his book on a
recent school visit.


Later this year, I will share with you my recipe for writing
a Medieval Story. Easy, simple, and fun for all to do.

I hope to write blog entries more often in 2010. It is the
lack of time not the lack of material that hinders me. I am
deep into my second book Young Knights of the Round
Table: The Kings’ Ransom. In this story a prince, an
orphan, and a blacksmith’s apprentice choose a dangerous
path when they swear by the Knight’s oath to save an
innocent man accused of murder and theft from death.

My writing workshops are also on the upswing. I have more
elementary school workshops coming up second semester. The
Girl Scouts’ workshops will be held again in Denver this
spring, and we also moving outward to Colorado Springs in
April. I am also working on more book signings.

It's great being retired!

Happy reading and writing to all.
Posted by ccarpinello at 20:01 1 comment: