The Shadow of Atlantis Blog Tour

Carpinello's Writing Pages is excited to participate in The Shadow of Atlantis Pump Up Your Book Blog Tour. This is the first book in the Shadows of the Past MG series. I just love these books. Each is an exciting adventure into past history and full of surprises!
About the Book:

Title: THE SHADOW OF ATLANTIS
Author: Wendy Leighton-Porter
Publisher: Silver Quill Publishing
Pages: 128
Genre: Middle Grade Literature / Time Travel / Adventure
BOOK BLURB:
James and Isabel Lancelot have disappeared in mysterious circumstances, leaving behind their children, 10-year-old twins Jemima and Joe. Nobody has a clue what’s happened to them, except for the family cat who was the sole witness to their disappearance. Using the portal of an old book – Shadows from the Past – the couple have travelled back in time but, having left behind the key to bring them home, they are now trapped somewhere in the past. With their parents missing, the twins are sent to live with their Uncle Richard, a professor of ancient history and archaeology, where they soon befriend their new next-door-neighbour, Charlie, a super-brainy boy who is the same age as them.

At the start of the school summer holidays, the three children decide to investigate the old book that had belonged to the twins’ father. Finding the book locked, they’re unable to open it until Jemima discovers she has the key. It was on her mother’s necklace, left abandoned on the attic floor after their parents’ disappearance. And there’s more… The children find a small pouch inside the wooden chest that contained the book and, inside the pouch are four golden charms shaped like owls.

With the book unlocked, an astonishing series of events begins to unfold. The youngsters hear whispering voices carried by a strong breeze that comes out of nowhere and then, a strange cloud fills the room. Through the mist, they see tantalising glimpses of an ancient city. Joe is the first to discover that if they step inside this cloud it will take them to another place. Jemima is surprised to hear her mother’s voice calling to her, reminding her to pick up the all-important key. Then, holding Max, her beloved Tonkinese cat, in her arms, Jemima follows the two boys into the mist. Arriving in the lost city of Atlantis, the children are astounded to find that it was no myth, but a real, historical place. And so their adventures begin…

It doesn’t take them long to realise the owl charms are mini translation tools, enabling them to communicate with the Atlanteans, but when Jemima attaches one to Max’s collar, the large cat begins to speak. The children can’t believe their ears, especially when Max tells them the truth about their parents’ disappearance. The twins are overjoyed to learn that their parents aren’t dead but simply lost in time, and now their quest begins in earnest. They must find and rescue James and Isabel, searching throughout the pages of history. But, first, the youngsters have an important mission – to warn the people of Atlantis about the disaster that will soon destroy their city. Will they succeed? And can they find their way back to the safety of their own time before it's too late?
About the Author: 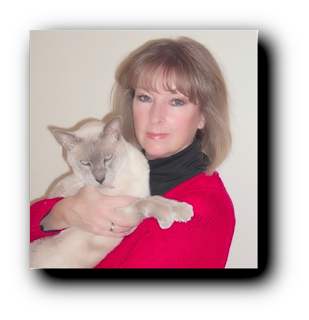 After teaching French, Latin, and Classical Studies for almost twenty years, Wendy’s career took a new direction when she turned to her first love – books – and decided to devote herself to writing children’s fiction. With the old adage “Write about what you know” in mind, when she first came up with the idea for her series of time-travel adventures, she jumped head-first into the ancient world of classical history and mythology which formed the backdrop for her first three books. As the series moves forward in time, she sets each story in historical periods that have always fascinated her. Although no longer in the classroom, she seeks to entertain her young readers, to engage them, to foster a love of reading, but also to educate. As she takes them on a thrilling journey into the past alongside her three young time-travellers and their talking cat, Wendy hopes that her love of history, myth and legend will rub off on them along the way.

Facebook: https://www.facebook.com/WendyLeightonPorterWriter
PRAISE
"Author Wendy Leighton-Porter's Shadows from the Past children's series is an outstanding collection of books that would make an excellent addition to any home or school library. Written in an engaging style with characters that will have great appeal to young readers, this page-turning collection will be as enticing to avid book enthusiasts as it will be for reluctant readers." CHILDREN'S LITERARY CLASSICS
BOOK AWARDS
"The Shadows from the Past series is perfect for a rainy day and a must-have for a child's shelves." READERS' FAVORITE BOOK REVIEWS
"The Shadow of Atlantis is a well-written story with a collection of likable main characters, a solid plot line, snippets of educational facts about a historically important location and event, and, is filled with mystery, magic, and suspense. This book grabbed me at the prologue and had me hooked until the end." MOTHER DAUGHTER BOOK REVIEWS

Max blinked in surprise, scarcely able to believe his eyes. A cloud of mist had appeared in the middle of the room – he’d never seen anything like that in the house before. What was it? Where had it come from? At its heart, lit by an eerie glow, he glimpsed the shadowy image of an ancient city. It was a bit like a mirage that travellers sometimes see in the desert and, in the same way that a mirage looks real but shimmers in the heat haze before gradually fading from view, so the fuzzy outline of the town now flickered and began to disappear.
Max gasped as a hand suddenly shot out of the mist, clawing desperately at the bare floorboards of the attic, while horrified voices cried out from deep within the cloud.
‘What are you doing, Isabel? Where’s the key? What have you done with it?’
‘I don’t know. I can’t find it. I must have left it on the floor next to the book.’
‘Seriously? But you know we can’t get home again without the key. We’ll be stuck here, and no one will know how to find us.’
‘What? Oh, no, James, we have to go back. What about the twins? This can’t be happening. What are we going to do? Help, someone, help us, please…’
The anguished cries grew fainter as the image of the city continued to fade and the searching hand melted away, its scrabbling fingers the last things to go. Then, all was quiet once more.
Max cocked his head on one side, focusing his aquamarine eyes on the last shreds of mist, but there was no longer any sign of the outstretched arm. The desperate voices had ceased and only the rasping of his own breath broke the silence. They’d vanished. Where had they gone? Alone and afraid, Max remained rooted to the spot, rubbing a paw over his eyes as he stared at the empty space where the vision had been. He settled down to wait for James and Isabel to come back, but he wasn’t to know that the gateway to the past had now closed and that they were trapped inside. The large Tonkinese cat was seized with panic. What should he do? Should he go and fetch help? But how could he do that? Nobody would be able to understand him.
Getting to his feet, he padded over to a carved wooden chest that sat on the floor and peered inside. Its open lid revealed a threadbare, blue velvet lining, but nothing else – it was empty. Hmm, so no clues there, then. Beside the chest lay an old book whose leather cover bore an intricate design. Aha! There, next to the book, Max spotted Isabel’s favourite necklace with its small golden key attached to the delicate chain. Was that what she’d been trying to reach?
He looked around the attic, stumped. Apart from those three objects, no other evidence remained of what had just happened. Realising there was nothing he could do, at least for now, Max headed for the door, heaving a deep sigh as he cast a final glance back over his shoulder.

Posted by ccarpinello at 01:30 No comments: