Welcome to Carpinello's Writing Pages where I introduce you to new authors, famous authors, and old friends! Today we have middle grade author Matt Harry, no stranger to writing and entertainment, with his second book in the Codex Arcanum series which was just released Nov. 5th. I've just started book one Sorcery for Beginners and am excited to get into it

Here's a bit about Matt:

I've been writing since I was a middle grader. I learned to make movies at the University of Southern California, which was the closest I could get to attending Hogwarts in the real world. Since then I worked as an editor, screenwriter, director, producer, and college professor. I live in Los Angeles with my wife and two sons, all of whom (thankfully) like to read. 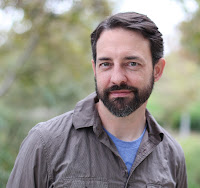 First off, I find that middle grade stories are the ones I like reading best. MG protagonists are at such a crucial stage in life: trying to figure out what kind of people they want to be, but not quite yet burdened with all the social issues teenagers face (and which I find trying to write about). Secondly, I love engaging with middle grade readers. They’re so excited about books and magic and adventure — all things I like to write about.

I love reading MG but I also have a preference for grounded sci-fi and fantasy. Anything too alien or macho is hard for me to relate to, but give me a wise-cracking, ordinary schmo who discovers some bit of magic/futuristic tech, and I’m on board. Some recent favorites include the Brilliance trilogy, The Library at Mount Char, and All the Birds in the Sky.

I love food, whether it’s going out to eat or cooking something interesting at home. One of the best parts of living in Los Angeles is that there’s so much amazing cuisine to try, from taco trucks to Michelin-starred sushi restaurants. I’ve lived here for 20 years, and I still haven’t tried them all! What we’re having for the next meal is a frequent discussion in our house, often times while we’re enjoying the current meal. But since I can’t eat all the time, I also like playing video games, watching movies, and hiking.

Tell us about Cryptozoology for Beginners and how the story came to be.

Cryptozoology is the sequel to Sorcery for Beginners, in which a group of middle schoolers find a help guide for magic, then have to keep it from being stolen by bad guys. In this book, I wanted to explore another magical element from the beginner’s perspective. I considered Magical Places, Magical Artifacts, and Time Travel before settling on Cryptozoology, the study of undiscovered (and in my books, magical) creatures.

I knew I didn’t want the main character from Sorcery to be the protagonist again, so this time the story centers on Trish Kim, a tough 13 year-old who’s trying to figure out how to tell her friends and family that she’s gay. It was fun to write within the same group of characters, but from a different perspective. It’s something I plan to continue in future books.

I also wanted to focus on issues surrounding animal conservation and whether or not people can be trusted to do the right thing. And like Sorcery, there are boxes that offer up lots of side information on magic, history, and magical creatures. So there’s a lot going on in this book!

Here's a peek at Cryptozoology for Beginners: 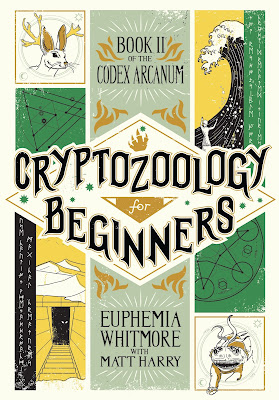 Only six weeks after a handful of teenage sorcerers defeated a team of anti-magic mercenaries called the Euclideans, Trish, Owen, and Perry are called back into action when they discover that the world’s cryptids (aka magical creatures) are disappearing. They’re partnered with brusque team leader Jacinda Greyeyes and their former nemesis Bryan Ferretti in a mission to travel all over North America, collecting famous cryptids like the jackalope, the chupacabra, and the altamaha-ha.

But when another team of teenage sorcerers suddenly vanishes, the spell casters set out for Germany, Egypt, and the Seychelles to uncover why the Euclideans have been abducting and experimenting on magical creatures like the unicorn and the sphinx. The secrets they uncover threaten to divide them, and reveal a truth that will permanently upend the way the world sees sorcery.

Sorcery for Beginners was my first published novel. Booklist called it a “clever, often hilarious adventure” and Publishers Weekly said “it’s a charming package and a drily funny adventure.” It’s also being developed as a TV show. But my favorite part of publishing the first book was seeing kids react to it. We even had a few kids dress as characters from the books!

I just finished a draft of an adult novel about a cynical spiritual investigator who can see people’s souls. After that, if things go well with Cryptozoology, I hope to start on the third book in the Codex Arcanum series.

Keep writing. It’s so easy to get discouraged, but I’ve found that writing is like exercise — it’s hard to do when you’re out of practice. So I make it a habit to write at least five days a week, to write even when I’m not feeling it, and to always be working on something.

Also, get comfortable with social media. I’m amazed how many people all the world have discovered my books through Facebook and Instagram.

I will be appearing at book events around the country over the next few months, but I really like doing school visits. If you have a school that you’d like me to come visit, reach out to me on Facebook and hopefully we can work something out!

Indiebound is a great way to find copies at your local bookstore.
Amazon
Barnes & Noble

If you order through my publisher Inkshares, I’ll send you a FREE 60 page short story that connects Books I and II!

Posted by ccarpinello at 01:00 No comments: