Join me in welcoming the newest Tween books on the market. The Wishing Ring and Billy the Bonsai Bull were released by Muse It Up Publishing on Feb. 3, 2012. Introduce your young reader to these two Muse authors and their stories.

The Wishing Ring by Shellie Neumeier 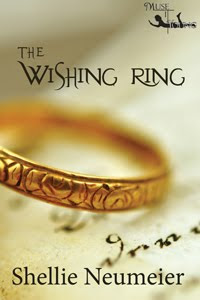 
The King’s castle stands alone atop Grand Ur Mountain, but even that does not match the solitude surrounding Princess Ali. With a carrot-shaped nose, she trudges through her princess duties with the most unfortunate face. With her pet greybar (a creature with the head of a greyhound, body of a polar bear, and wings of an eagle) as her only friend, Ali dreams of becoming a beautiful princess.

When Cory, a ninja-in-training, drops through the royal chimney, he does not intend to enlist the help of anyone, much less a girl, but she holds the key to the Creator’s map. The ancient map marks the secret hiding place of the magic Wishing Ring, a ring grants the wearer one wish.

Cory’s mysterious need for the ring and Ali’s dream of a beauty send the pair to a forgotten land. Only the war ravaged clan of Odana can translate the map’s key. But even if they manage to find a translator, the question remains—can they beat the Ogre who guards the ring?

eBook available at Amazon Kindle and Muse Bookstore.
See more of Shellie's work at her website. 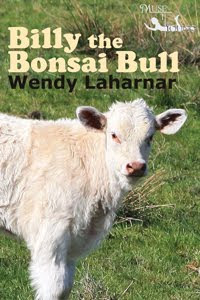 Billy the Bonsai Bull is an Australian true story told from the little bull's point of view.

Billy is a stubborn, orphaned calf who is losing the battle to survive. Hope revives in an unexpected way, through the milk bottle he detests, and brings him a sense of belonging. However, it takes more than a place in the pecking order for this little white bull to thrive. It takes a miracle.

The calf padded forward. He looked into his mother’s face and mooed softly. Her glazed, weepy eyes no longer focused on his. He nibbled on her ear. She didn’t stir.

The farmer’s wife sighed and reached forward to pat his head. “Come on, little bull. I’ll get you a nice warm drink. What do you think of that?” His hair bristled. Without his mother’s protection, he didn’t feel comfortable with these people. He darted away to the safety of a gum tree.

“This calf will be harder for you to rear than mothering a newborn,” the farmer warned his wife. “This one’s had the real thing for three weeks.”

“Maybe, but you’ll have to help me get a collar and lead on it. After that, how hard can it be? Besides, I must succeed. I promised Misty.”

The little bull waited till they walked up the hill and out of sight. He ventured out from behind the tree trunk and settled on a patch of dirt inside the hawthorn bush a short distance from where his mother lay. In his cave-like shelter he dozed, until a sudden, terrifying pressure on his ribs woke him.

The farmer’s knee pinned him to the ground. He squirmed and wriggled to his feet, kicking defiantly with his hind legs, but the farmer held him fast. The wife approached with a thin orange strap and secured the collar around his little neck. She picked up a bottle filled with a strange white liquid and pushed its rubber teat into his mouth. The teat smelled like the black boots on her feet. He eased it out with his tongue. She tried again. With her free hand she continually scratched his throat. He had to swallow. Then he gagged and struggled and spat and stamped on the woman’s foot.

She laughed and hugged him. “In spite of your tiny body and cute little face, you’re such a stubborn beast. You behave like a goat. A Billy goat! That’s what I’ll name you.” She stood and tugged on the lead. “Come on Billy, it’s me or nothing.”

Available at Amazon Kindle and Muse Bookstore.
See more of Wendy's work at her website.
Posted by ccarpinello at 19:50 1 comment: