Young Knights of the Round Table Release Announced! 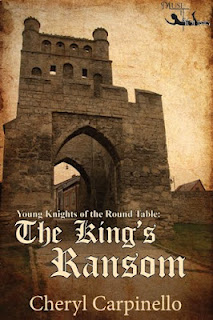 Young Knights of the Round Table: The King's Ransom will be released in eBook format on May 25, 2012. Copies will be available in Kindle, Nook, Sony, Html, and PDF format for $3.50 at MuseItUp Publishing's Book Store.


Please join me for the on-line Launch Party May 25 and 26 at MuseItUp Publishing and here on my blog. Lots of food and drink and all of it calorie-free!


The paperback version will be released later in the summer or early fall.


I look forward to sharing my newest adventure with you!
Posted by ccarpinello at 21:18 1 comment:

Email ThisBlogThis!Share to TwitterShare to FacebookShare to Pinterest
Labels: Cheryl Carpinello, Guinevere: On the Eve of Legend, MuseitUp Publishing, The King's Ransom, Tween adventure, Young Knights of the Round Table

Pre-Launch for Young Knights of the Round Table: The King's Ransom


I hope you will enjoy a chilled glass of mead or ale and chocolate-covered strawberries as you view the Young Knights’ cover.

For all visitors today, please leave a comment to enter to win a free ebook of Young Knights of the Round Table: The King’s Ransom after the official launch. If you are unable to leave a comment, please send me a message via FB or DM @ccarpinello. 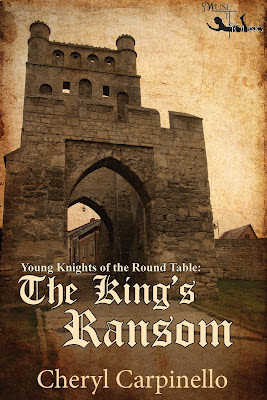 In medieval Wales, eleven-year-old Prince Gavin, thirteen-year-old orphan Philip, and fifteen-year-old blacksmith's apprentice Bryan are brought together in friendship by one they call the Wild Man. When an advisor to the king is killed and a jewelled medallion is stolen from the king’s treasury, the Wild Man is accused of the theft and murder. Filled with disbelief at the arrest of the Wild Man, the three friends embark upon a knight’s quest to save their friend’s life. To succeed, the three must confront their fears and insecurities, and one of them will have to disclose the biggest secret of all. Join Gavin, Philip, and Bryan on their quest and share the adventures that await them in the land of King Arthur and his Knights of the Round Table.

The adventures these future Young Knights of the Round Table experience in their quest to save their friend are filled with the fantasy and adventure story elements that children love to read. There’s a villain, secret passages in castles, swordplay, and even a witch. And with King Arthur’s appearance, astonishing secret identities being revealed, and a happy ending, what more could anyone want in a good read? —Tyler R. Tichelaar, Ph.D. and author of “King Arthur’s Children: A Study in Fiction and Tradition”

I’ve also included a short excerpt from the book for you to read. Grab another drink and some more strawberries and enjoy!

Gavin bounded down the keep steps, eager to discover the cause of the cacophony echoing through the tower. The snorting and whinnying of horses competed with the voices of knights calling to each other across the courtyard. He stuffed his green tunic into his black breeches as he ran. In too much of a hurry to comb his hair, Gavin tried to smooth the brown cowlick with his fingers.

As the youngest prince of Pembroke Castle, Gavin dutifully attended his daily lessons. As a page, he was learning to handle a sword in battle and take care of the weapons, equipment, and horses of the knights. Soon to be a squire, he worried about how he would act in battle. Well, not exactly in battle. Squires tended the knights’ horses and guarded the supplies while they fought. The unspoken rule of warfare stated that squires couldn’t be put in danger. However, others in the castle had talked about the times the enemy had sent warriors behind the fighting to attack the supply line. Squires who hadn’t run away had been injured or killed.

Gavin worried about disgracing his family and the crown, worried that he would be scared enough to run or worse, get injured or killed.

The simple truth was, he was afraid.

Burying those thoughts, Gavin burst into the bailey courtyard amassed with horses and knights milling about. Dust swirled, choking the air, causing him to cough and sneeze. He recognized his older brother Robert across the chaotic courtyard and raised his hand in salute.

Robert led his black gelding over and handed Gavin the reins.

“What’s happening? Where are you going?”

“Someone broke into the throne room last night and stole the King’s Ransom...”

Gavin gasped. The medallion was made of gold and embedded with emeralds so dark the jewels looked black except in the sunlight. Then the deep green had sparkled lighter and reminded him of the first blades of grass pushing up through the dark earth in the spring. The tremendous weight of the medallion required him to use both hands when holding it.

Stories passed down said that a traitor over the channel had used it to force a king to ransom his kingdom. To be in possession of it meant to be in possession of power. Many men wanted that power. Gavin’s grandfather’s grandfather had found it as a young man during the siege of a French castle. Though only seventeen, that prince had recognized its importance and had risked his life to bring it home. To protect his find, he’d spent the night in a storeroom listening to the screams of the defeated forces and the drunken laughter of the victors. He’d presented it to his father, and it had been in the possession of the King of Pembroke Castle ever since.

“...and killed one of our men,” Robert finished, breaking into his thoughts.


Thanks for stopping by! Don’t forget to leave a comment via FB or DM @ccarpinello!