Carpinello's Writing Pages welcomes from the United Kingdom MG author Jemima Pett and her world famous guinea pigs Fred and George! Be sure to check out Jemima's special treat for readers of this blog near the end of her interview.

First, a bit about Jemima:

I was one of the science geeks at school, despite the fact I was also a bookworm and wrote stories or painted in my spare time. The careers advice I had was to do Maths at University – no thought of what I should do after that. As it happens, I shouldn’t have done Maths at university, and my maths mistress said I hadn’t got the right type of brain for it about a month before we left school. I was devastated!

So I did all sorts of things trying to work out what I should be doing, some of them were mundane, some more exciting. I kept studying for my careers too, and have a Degree in Maths, a Diploma in Personnel Management, a Diploma in Earth Sciences and a Masters in Environmental Technology, which was my real calling. But I kept writing things for work or in my spare time, mostly newsletters and manuals, and eventually started writing the stories about Fred and George. It was three years after I wrote them that I started thinking about publishing.

It was more a case of MG picking me. I wanted to write the stories about my guinea pigs, Fred and George, and their exciting fantasy adventures. So I wrote them, in an old fashioned sort of way, like books I would enjoy reading. Which is just as well since I do enjoy reading them! The books aren’t easy reading, though, and appeal to younger readers whose reading age is more like 14.

I like older MG books, and books for 12-15 years olds that are adventures or animal stories. I also read crime novels and have always enjoyed fantasy and scifi, although I find a lot of today’s scifi a bit disappointing and the fantasy formulaic. I don’t go for vampires or zombies. What I like about MG is that they are clean interesting stories with some complication in the plot, enough to make you think!

In the morning, before I settle down to write, I look after my guinea pigs – which takes me hours!  They are great characters and all of them have lap time and a run in the morning while I clean their cages and get their breakfast. Then it’s time for my breakfast! I also enjoy gardening, birdwatching and golf. In fact I like a lot of outdoor things and don’t spend enough time doing them these days.

Tell us about The Princelings and the Pirates, and how the story came to be.

I originally thought of writing a book about Fred and George as the Princelings of the East, and very quickly decided it should be a trilogy. For some reason I decided on the titles long before I wrote them. I suppose it was a case of “What situation can I put them in to make a good story”. At that stage of my writing things were very character driven, which means the characters did things because they were who they were, not because I was driving the plot. I found very quickly that they were driving the plot, and I was just writing it all down. The biggest problem in Pirates was finding a problem the Princelings have to solve. It’s not a big problem – the wine hasn’t been delivered to the castle – but when they go and investigate, they get captured by the pirates and it all goes from there and a whole load more problems turn up. In a way, I wrote it too soon - I could have made a lot more of the Pirate King. I did an interview with him for my blog in summer 2012 (there was a whole character interview series) and I discovered he was a very scary character indeed. Maybe we’ll come across him again, I don’t know. 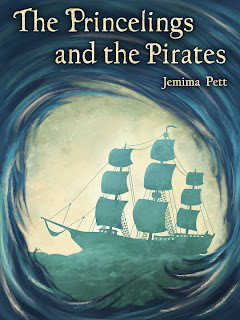 Here's a peek at The Princelings and the Pirates:

The Princelings of the East is a trilogy relating the adventures of unlikely heroes Fred and George. Two innocents abroad, they solve problems caused by unintended consequences, commercial greed, and blind prejudice—and still find time to engage in troubled love affairs and nearly blow themselves up with their own inventions.

The opening of The Princelings and the Pirates, the second book in the series, finds Fred and George happily pursuing their interests and enjoying the hospitality of Castle Buckmore. When Prince Lupin of Buckmore announces his unhappiness with the wine, they set off to discover what has gone wrong at the winery. Captured by pirates, shipwrecked, and in danger for their very lives, the heroes are drawn into the Battle of Dimerie, where Fred meets his true love and George gets more than he bargained for.

Suitable for confident readers ages 10 and over, The Princelings and the Pirates is a fantasy adventure where guinea pigs rule the world. It combines a generous amount of swashbuckling with a dash of concern at society's ills spiced with the stirrings of a first love interest.

The Princelings series now has the trilogy, which stars Fred & George, and takes them through three adventures but also lead the pair to their destinies by the end of book 3. Then the fourth in the series stars the baddie in the first book, who is really very charming, and just misunderstood! The fifth is a bit different, and shows things are a bit darker in the princelings world than we’ve seen so far. It’s been suggested that it is YA or even adult, and I think it is for older children, in the same way the last few books of Harry Potter aren’t really MG any more.

I wrote the sixth book in the Princelings series, or its second draft, since I abandoned it three years ago, at Camp NaNoWriMo in July. It stars Victor, who is a hero in books 1 and 2 and probably gets the ‘most popular character’ vote in the trilogy! He’s grown up in this book, and working as a business consultant. I think it’s still a tween book, but the plot is about inventions and investment and spies and smuggling, so I have no idea what you’d categorise it as! It takes us back to the people from the trilogy, as well – and the baddie from book 5 is in it, causing trouble in the background.

I’m also working on a biography of my father, who did exciting things in Africa in the 1930s, helping to set up the route for flying boats that went between London and Durban, and London and Australia.  So if anyone wonders why Princeling George is so into flying machines, including inventing a flying boat, now you know!

Keep writing. Sometimes you get stuck and don’t know what you should write next. It doesn’t matter as long as you write. Your characters do things because of who they are. You can tidy it up later. You’re just telling their story! But it does help to keep a timeline of who is doing what in parallel with others. If someone is taking two days to do something, they can’t turn up the next day with someone else. And if you have werewolves in your story, make sure you have a full moon every 28 days. I’m a details person. One of the things that irritates me about Harry Potter is the way it’s dark at Hogwarts in June about 7 pm, much the same as at Halloween. Anywhere in the UK is light until at least 9pm in June, and in Scotland (which is clearly where Hogwarts is) it’s more like 10 or even 11!

I quite often write short stories about the Princelings world, so it’s worth following my blog and the website to get to see those as they happen.

A special offer for readers of Cheryl’s blog – you can get The Princelings and the Pirates FREE at Smashwords https://www.smashwords.com/books/view/157450 with the coupon code WT24A – valid till 12/31/13.

And if you like the fact that they are guinea pigs, you can follow the real guinea pigs at http://guineapigging.wordpress.com or http://facebook.com/georgesgpworld