Carpinello's Writing Pages is excited to be hosting Annie Douglass Lima again. Annie shares my favorite career: Teaching. A frequent guest here, she is presenting the final book in her Annals of Alasia fantasy series (released June 5th 2020). You'll learn more about this book as well as the others below. Also be sure to click on the link to her Amazon page as Annie is offering the rest of this thrilling series for 99 cents or Free through June 11th. And now,

Here's a bit about Annie:

Annie Douglass Lima considers herself fortunate to have traveled in twenty different countries and lived in four of them. A fifth-grade teacher in her “other” life, she loves reading to her students and sparking their imaginations. Her books include science fiction, fantasy, YA action and adventure novels, a puppet script, anthologies of her students’ poetry, Bible verse coloring and activity books, and a fantasy-themed cookbook. When she isn’t teaching or writing, Annie can often be found sipping spiced chai or pomegranate green tea in exotic locations, some of which exist in this world. 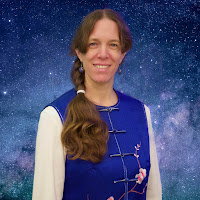 It’s not so much that I decided that.  The stories come to me, and when I write them, that ends up being the audience they fit best.

What do you do when you are not writing, and what types of books do you like to read?

I’m a fifth-grade teacher for my day job, so writing is what I normally do when I’m not teaching. When I have time to read, I enjoy fantasy or science fiction.

Tell us about In the Double Agent’s Service and how the story came to be.

It’s the sixth and final book in my Annals of Alasia fantasy series. Erik would give his life to protect King Jaymin. However, when an old enemy shows up with new schemes, that may not be enough.
Anya longs to be noticed by the king’s handsome bodyguard. But as she finally gains Erik’s attention, the notorious spy and double agent Dannel blackmails her into fulfilling a favor she has owed him for years. Anya is forced into a terrible choice: save Erik’s life, or protect her homeland.
Can Erik and Anya thwart an assassin and prevent a war before Dannel destroys everything that matters to them and to the kingdom?

Here's peek at In the Double Agent's Service: 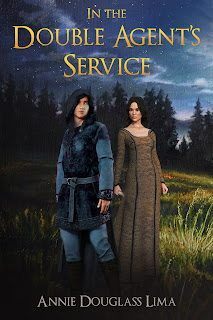 Pain.
Cold.
The smell of dry dirt.
A hard, gritty surface beneath his cheek.
Erik mentally catalogued the sensations in order of their intensity. He opened his eyes, blinked, and added another to the list.
Darkness.
Where am I? He struggled to sit up, and his pulse spiked at the realization that he couldn’t use his hands or feet. His ankles were bound together, and his wrists were tied behind his back.
What’s going on? Erik forced himself to a sitting position, noting the dirt floor beneath him, a rough wall at his back. Brushing his fingers over what he could reach of it, he discovered that the wall seemed to be made of the same hard-packed earth as the floor.
Am I underground? Though not completely smooth, the surfaces were too flat to be natural. Not a cave, then, but perhaps a cellar of some sort.
Or a cell.
He held his breath, straining his ears for any sound in the darkness. “Hello?” he whispered.
There was no response.
“Hello?” he said, a little louder. The acoustics hinted that he was in a small room. His head, already sore, throbbed anew at the sound of his own voice.
Erik leaned against the wall behind him, trying to keep calm. What happened? And where’s Jaymin?
Jaymin. Erik’s pulse started racing again. Had something happened to Jaymin?

Not all of my stories have required research. For others in this series, I’ve needed to look up details like how to start a fire without a lighter or matches, edible foods that can be found in the mountains, what’s involved in a medieval banquet, lacemaking techniques, and what colors different animals’ eyes glow in reflected light at night. The internet is great for finding out random facts!

Annals of Alasia (a young adult action and adventure/fantasy series): When one kingdom invades another, five young people are caught in the middle. As they work to uncover the truth, spy on the enemy, recruit an army, hide their identity, and protect the innocent, can they change the course of both kingdoms' destinies? (The first four books can be read in any order, and each one can stand on its own.) Prince of Alasia: An orphaned prince and his young bodyguard must disguise themselves and go into hiding after the kingdom of Alasia is overrun by invaders.  Can Prince Jaymin save his kingdom - and himself? In the Enemy’s Service: A young girl enslaved by invaders discovers ways to spy on the enemy and help her captive people – until her own father is implicated in the betrayal that led to the Invasion. Prince of Malorn: When Regent Rampus tries to take over Malorn, Prince Korram must flee for his life. Can he convince a rustic tribe to help him fight for his throne? The Nameless Soldier: The lone survivor of a brutal attack, can a teen warrior reclaim his honor and find a way to fight for his crippled kingdom under enemy occupation? King of Malorn: Pursued by assassins, can Princess Kalendria help her brother reclaim his throne and prevent a war - and catch the handsome neighboring king’s attention while she’s at it? 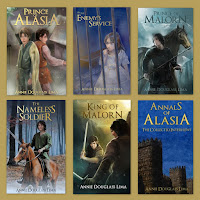 The Krillonian Chronicles: Set in a world alarmingly like our own but where slavery is legal, this action and adventure series follows the story of a young slave and the martial art he is passionate about. The Collar and the Cavvarach: Bensin, a teenage slave and martial artist, is desperate to see his little sister freed. But only victory in the Krillonian Empire's most prestigious tournament will allow him to secretly arrange for Ellie's escape. Dangerous people are closing in on her, however, and Bensin is running out of time. With his one hope fading quickly away, how can Bensin save Ellie from a life of slavery and abuse? The Gladiator and the Guard: Sentenced for a crime he didn’t commit, teenage slave and martial artist Bensin must learn to survive in the world of the arena, where any false move could result in death. Can he stand against the cruelty of the arena system and seize his freedom before that system crushes him? The Student and the Slave: Bensin and his sister Ellie are desperate to rescue Coach Steene, who sacrificed himself for their freedom. When members of rival street gangs express interest in Bensin’s combat skills, he realizes he may have a chance to save Coach…at a cost.

Heartsong (a young adult science fiction novel): Thirteen-year-old Liz Smith has been ripped away from one foster family after another for years, so the idea of a permanent home is tantalizing. Who cares if that home is a colony sixty-five thousand light-years from Earth? But when the adventure of a lifetime turns into the disaster of the cosmos, Liz can only retreat so far into the books that have always sheltered her from loneliness and loss. Trapped in half-truths and secrets that leave her questioning reality, can one orphaned bookworm find a way to stop two races from destroying each other … and somehow write a happy ending to her own story?

Not at the moment. I hope to draft another novel this fall, but I’m not sure yet what it will be about.

Don’t try to write a scene perfectly the first time or get frustrated if it doesn’t turn out as well as you hoped. Just get your ideas on paper in whatever rough form you need to, and never mind selecting the perfect words or fixing any mistakes. Leave the scene alone for a few days, and when you come back to it, read through it and smooth out the obvious errors. Repeat several times. If possible, read it aloud to someone; that will help you hear errors or issues you may not notice otherwise. I’ve found that it usually takes lots of passes before I’m satisfied with something I’ve written. Trying to make it perfect the first time is ridiculously time-consuming, stressful, and next to impossible, at least for me.

A young teenage writer I’ve been mentoring, Sabrina Gulliver, is in the process of publishing her first book (a young adult science fiction adventure called Runaway from Khoeli). The Kindle version is now available on Amazon for preorder! I would love it if you’d take a look, and if it seems like something you might enjoy, please do encourage her by ordering a copy. Or maybe a young person you know would like to read a novel written by a high schooler and perhaps be inspired in their own writing. Please consider “gifting” one to someone else who might like it! You can find Sabrina on Instagram at sabrinajoygulliver.

On Amazon! You can see them all on my Author Page.