Before our author interview:

Here at Carpinello's Writing Pages, we're heading into the archives to bring you writing tips from the authors we've interviewed over the years. Hope these are helpful, and if so, please leave the authors a short comment.

Keep writing, even if you are discouraged. Even if it feels like no one cares about your words, and even if they did, they suck like a herd of anteaters at an anthill buffet. (By the way—did you know a herd of anteaters is actually called an armory? Well, now you do. You’re welcome!) No one grows as a writer if they quit trying. And, yes, I’ve had to take my own advice. Often. S. J. Henderson, author of Daniel, The Camp-er.

The best advice I was given and can pass along is to read widely from the best books, not only in the genre(s) you want to write, but the classics, too. We all absorb patterns of language while reading, so you ought to read the best. While you're reading, write every single day, even if it's only vague notes or a very rough draft. The only way to learn to write well is to write a LOT of words. I wrote story after story and two complete novels (never published, thank goodness) before I ever sold my first short story (about 500,000 total words in seven years). That was back in the "olden days" (1980's and 1990's) and I collected over 600 rejection letters before that first acceptance. No, that's not a typo! Katy Huth Jones, author of Mercy's Prince.

Here's a bit about Shawn:

Shawn P. B. Robinson, or as his friends call him, "Shawn P. B. Robinson," lives in Southwestern Ontario, Canada, with his beautiful wife, two awesome sons and two goldfish named Lunch and Supper. Sadly, Shawn’s former goldfish named “Breakfast” decided to explore the inside of the filter.
Contrary to popular belief, Canadians do not live in a continual winter wonderland. We have periods of wet called “Spring” and “Fall” and periods of warm which we call “Summer.” When it is not snowing, Shawn enjoys nature, hiking, riding his motorcycle and writing. While it is snowing, Shawn enjoys staring out the window at the snow and dreaming of warmer days.


Why did you pick to write books for MG/YA?

I first started writing MG books for my two sons, who were 8 and 13 at the time. I hadn’t planned on writing them a book, but… well… I ended up getting sick—really sick. I ended up with a viral infection in my brain (encephalitis) that nearly cost me my life. While I was lying in the hospital, I decided I would write a book for my two sons. I figured I might no longer be able to tell them bedtime stories, and I thought that if I wrote them a big long story, they would have something they could read and remember me by.

Now, I don’t want to spoil the ending, but… I survived. As I recovered, I finished my first book (Arestana: The Key Quest) and then started into the sequel. Since then, I haven’t really stopped writing! I’m up to around fourteen books, including a YA fantasy series. 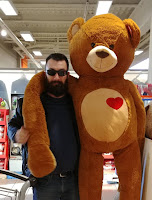 I mainly read MG books, to be honest. I like them as the stories are often fun and positive. It’s also helpful to know what’s out there in the genre I write, and what works for young readers as I’m writing more books!

Outside of writing, I focus on learning how to self-publish more effectively, and I blog on that topic. We also spend time with my family, and I continue to try to recover. Recovery from encephalitis is a long, hard road.

Tell us about Annalynn the Canadian spy: Terrible Tissues and how the story came to be.

Annalynn the Canadian Spy: Terrible Tissues is the first book in my new series, and it’s been a blast to write and even more fun to share!

It started with a young girl named Annalynn. We are really close to Annalynn and her family. One day at the church both our families attend, she showed me a toy she had been given for Christmas. It was a toy spy gadget, and my wife told me that Annalynn was really into spies. I decided to try to write a short book about Annalynn as a spy and gave it to her for her birthday.

I ended up liking the story so much that I wrote five other books to go with it. Now it’s a six part series!


Here's a peek at Annalynn the Canadian Spy: Terrible Tissues: 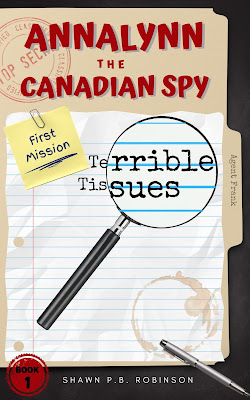 Ten-year-old Annalynn has just been hired as a spy.

Two men and two women break into Annalynn's home and steal a box of tissues, literally from under their noses. No one can imagine why someone would do such a thing, but Annalynn has been put on the case.

Her country needs her, but does she have what it takes?

Join Annalynn as she embarks on an adventure of a lifetime as she learns how to fly her out of control jet, faces off against a berserk Moose, has to dress up like an Opera Singer, and finds out that thumb tacks are her enemy.

Laugh your way through this series starter in the first book in the AtCS Series: Terrible Tissues!

I mainly use Google. I know that’s terrible… but Google and I have a special kind of relationship. I search for stuff, and Google gives me information. It’s worked well for us, and I foresee a long and fruitful relationship.

I also seek out other people who have expertise in certain areas. Just recently, for my YA series, I contacted my sister about a challenge I was facing. She has her Ph.D. in Biochemistry, so I asked her about some details regarding a poison that exists in my new book. I wanted to make sure it made sense, and she knows far more than I do about the body and how it reacts to various toxins.

My first series is an MG Fantasy series called Arestana. It’s about a 13-year-old boy who gets pulled into another world. Once he gets pulled in, he has to complete a wild quest in a ridiculously absurd world if he wants to get back home. It’s packed full of adventure and oddness and humor (or “humour” as we spell it in Canada)! This series has three books in it, and I’ve toyed with the idea of writing a prequel.

My second series is a series of short stories called Jerry the Squirrel. Jerry is a Squirrel inventor and, while he is quite clever, none of his inventions turn out the way he wants them to. The books are set in the same world as Arestana, and there’s a bit of a crossover between the books. I’ve also created a Jerry the Squirrel novel that lines up with the second Arestana book, but I haven’t published that book yet.

My third series is the newest one is my Annalynn the Canadian Spy series.

I have two book series  in mind.

The one series is a YA fantasy book. Book one is written and has moved through the Beta Reader stage. It’s been extremely well received, but still needs a lot of work before it heads to the editor. I’ve nearly finished the rough copy of book two and hoping to finish off book three by this fall.

The other series is all still in my head, and I hope to start writing it this fall. It will be an MG book, but different than my other series. My Arestana, Jerry the Squirrel and Annalynn the Canadian Spy series are all packed full of humor. This one, however, will be a more serious one. It’ll be set in a fantasy world.

Just keep writing! I think a lot of authors struggle so much to get their books written because they do not carve out the time they need to write. If you just “plan on getting to it soon,” you might not ever get around to it. Just write!

Hey! I love to hear from readers! Send me a note through my Instagram, Facebook page, contact page on my website or some other creative means of getting ahold of me. I’m even willing to entertain the idea of carrier pigeons. I’d love to hear what you think of my books and how I can encourage reading in young people!

Everywhere! My books are available on just about every site that sells books, and you can order them through pretty much any book store on the planet. They are also available on Jupiter and Mars. I’m trying to get them into stores on Saturn and Neptune, but everyone knows people on Saturn only read non-fiction and people on Neptune only eat books. So, naturally, those are both hard markets for an author like me to break into.

Here are some easy links to find me and my books!

https://twitter.com/ShawnPBRobinson
Posted by ccarpinello at 01:00