Carpinello's Writing Pages welcomes Ralph L. Angelo, Jr., author of the adventure Redemption of the Sorcerer, a YA novel suitable for Middle Grade and adult readers as well.

First, a bit about Ralph:

I’ve been writing for approximately 15 years. Redemption of the Sorcerer is my first novel. I’ve written for motorcycle touring magazine previously as well as a motorcycle safety ‘How To’ instructional book entitled Help! They’re All Out to Get Me! The Motorcyclists Guide to Surviving the Everyday World. 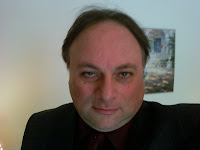 Why did you choose to write books for YA?

The reason I wrote  Redemption is because I thought to myself ‘ What are those who graduated from the Potter novels going to read now? Redemption of the Sorcerer is a safe book for kids to read, but by no means is it a children’s or YA book only. Anyone who enjoys action, adventure, and magic-laden story lines will like it. I like to think of it as a cross between Harry Potter/Indiana Jones/Lord of the Rings. It has that high adventure piece in there. It’s just a fun roller coaster ride.

I am an avid motorcyclist, an avid Skier and guitar player. Also I can be a voracious reader when I allow myself. I’ve read close to 50 books in the past year.

Tell us about Redemption of the Sorcerer and how the story came to be.

As I mentioned earlier, Redemption of the Sorcerer is the culmination of my wondering ‘Where do we go from here?’ in regards to what kids would read now as well as older readers who have enjoyed this type of storyline. Look at the Potter movies. Lots of adults love those moves as they do The Hobbit and Lord of the Rings. They are ‘safe’ movies for the whole family who loves spectacles. All those films sprung from books that were written the same way. It’s fantastic over-the top-adventure with deep, human characters that readers can empathize with, even if the characters do have all these wonderful powers and abilities. 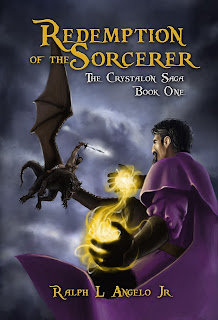 Now for a peek at Redemption of the Sorcerer:

Crystalon is a corcerer of unprecedented power. He is the ruler of his world and his universe. But Crystalon is still a man, not a God. What happens when that man, after centuries of immortal life and power loses his way, giving in to human temptations until he is finally seduced by the siren call of the power that he wields?

What follows is an epic adventure that spans two universes, while the man caught in the midst of it all seeks redemption from his past sins. But will he see the error of his ways in time to save both universes from an evil, nigh unstoppable foe and utter annihilation? Or, will an incalculable amount of innocent sourls be damned to an eternity of enslavement and doom?

The aforementioned Help! They’re All Out to Get Me! has been out for about eight years now. I have a new novel out with Pro Se Publications entitled Torahg the Warrior: Sword of Vengeance which is a very Conanesque sword and sorcery novel. This one is not for kids. There are some bad words within it pages and some veiled situations. Nothing blatant or graphic or what would be termed as erotic, but it is definitely in that vein as the old pulp novels were.  I also have the sequel to that book Tales of Torahg, Vol. One finished. Also out is The Cagliostro Chronicles, a sci-fi adventure novel about man’s first faster-than-light space flight some 80 years from now. Uncovered is a coalition that has sought to keep man mired within his own solar system for years.


I just started writing the sequel to Redemption of the Sorcerer. I figure that will be out about a year after Redemption's release.

Write. If you want to complete a story, push yourself. When I get into a groove and have nothing else on my plate, I push myself to 2000 words a night. You can always re-edit what you don’t like later. You’ll know when it’s time to relax and not push, but if you are trying to get a book finished, sit down, set yourself a number of words you want to do a night, and stick to it, whether it be 500 or 5000 work at it. Here’s a little secret, Redemption took me eight years to complete. I did not push myself. Since then I have written three novels and now started a fourth all since last April. This doesn’t include various short stories I’ve done, two of which came out of the original Torahg book but deleted due to space constraints. Once you begin writing you usually get into a rhythm and before you know it a scene will be completed. When you do a word count on what you just wrote, you’ll end up surprising yourself.

Support your favorite authors. There’s not a lot of money in this game; that’s why a lot of us turn out multiple books. Until and if we ever do get recognized, we’re one fish in a sea of many. If you like us and our books, recommend them to friends and those who like the same reading genres you do. Spread the word!


Cheryl, thank you so much for the opportunity to speak to your readers today. It is very much appreciated.

Where to find Ralph and his books:

Posted by ccarpinello at 21:03