Carpinello's Writing Pages welcomes MG author Steve Griffin from all the way across the big pond!

First, a bit about Steve:

I grew up in Warwickshire, England, and at school I used to write all the time – action adventure stories involving my friends as heroes and villains, which got passed around the class. I was sure I was going to be a writer, but somehow it all got lost during my college years in Southampton and Stirling, in Scotland. I began writing poetry in my twenties at the same time as working for environmental organisations, first in the old industrial valleys of south Wales, then in London. I was spurred on by getting poems published in poetry magazines and for schools. Then a few visits to a lovely garden in a remote part of Herefordshire gave me the idea for a new adventure / mystery series, The Secret of the Tirthas, and I began writing adventure stories again. I now work part-time for a charity in London and live in the Surrey Hills with my wife and two young boys. I write whenever I get the chance!


The City of Light, Book 1, is currently FREE on Amazon.

I write mainly for the older middle grade / teen audience. There’s a huge flourishing of imagination and independence at this age which makes it possible to believe in heroes who deal with things that adults and even older teens would struggle to cope with. 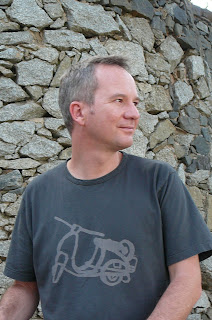 I read very widely—a lot of contemporary fiction—but I also like contemporary fantasy, things where the supernatural infringes subtly on everyday reality. A lot of the best of this is written for younger readers (The Dark Rising, Harry Potter, His Dark Materials, more recently The Lie Tree).

I live in a lovely area of rolling pine-clad hills just 25 miles south of London, so I love getting out and rambling. When I lived in Scotland I did a lot of proper hill walking, but it’s going to be a while before I can get my two small boys up a mountain! Thankfully, there’s nothing too high for them here in Surrey. I also love reading, and socializing and going to gigs with friends in London. And of course messing around with the boys…

Tell us about The Dreamer Falls and how the story came to be.

The Dreamer Falls is the third book in the adventure mystery series The Secret of the Tirthas. The series was inspired by a fabulous garden my parents-in-law used to own, deep in the Herefordshire countryside, which was made up of two dozen hedged ‘rooms’ full of curious statues, fountains, and artwork. When I stayed there, I had the idea for a story in which each ‘room’ contained a portal to a sacred place on the planet. From there it didn’t take long before I had my heroine, Lizzie Jones, a resolute and thoughtful girl who inherits the house from her great-uncle. In the first book, The City of Light—currently FREE on Amazon—with the help of her great-uncle’s little dog, Lizzie soon discovers the portal to the sacred Indian city of Kashi, where street children are being killed by the notorious ‘Pisaca of Kashi’. She comes to suspect that the killer is an intruder in her garden, using the portal to evade capture. What will she do? 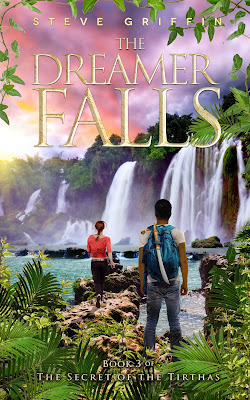 Here's a peek at The Dreamer Falls:

A mysterious garden full of portals in the English countryside.

An ancient book, warning of supernatural beings preying on humankind.

A missing boy – and a girl who has seen too much.

Living with the secret of the tirthas is getting too much for Lizzie Jones. Even when her friend Xing warns her of the plans of the evil beings using the portals, she decides she’s had enough. After all, they’ve defeated all the demons, haven’t they?

Then Lizzie finds a discarded phone by an African mask in one of the gardens. The phone of local village boy Thomas Bennett, who has recently disappeared. She enlists the help of a teenage shaman and his sister to track the boy, who has been kidnapped by bandits. The adventure takes Lizzie deep into the rainforest. When she is furthest away from home she encounters one of her oldest and most deadly foes.

Once again, Lizzie must act – but what can she do?

Yes. Each book in The Secret of the Tirthas focuses on a new portal in the garden, which leads to a new adventure, whilst also building towards an overarching story in which a group of demons and humans intend to corrupt the power of the tirthas for their own evil ends. In the second novel, The Book of Life, Lizzie is chased by half-crazy men and boys to an isolated villa on the Louisianan bayou, where a sickly girl and her helper are trapped. There she has to solve the mystery of the house’s grisly past before she can get back home.

Yes, I’m working on the next book in this series, which has a working title of The Lady in the Moon-Moth Mask.

Keep going, keep learning, keep developing. Manage your expectations. Only do it if you love it and want to do the best you can.

I’ve had over fifty poems published, in magazines such as Poetry Ireland, The New Welsh Review, and Poetry Scotland. You can check some out on my website, or by searching #stevegriffinpoems on Instagram.


The City of Light, Book 1, is currently FREE on Amazon.

Ebooks and paperbacks:
AmazonUK
AmazonUS
The ebooks are also available at most ebook retailers including Barnes & Noble, Smashwords, Kobo etc.
Posted by ccarpinello at 12:50