Carpinello's Writing Pages is excited to participate in Pump Up Your Books blog tour for E. P. Bellows. I love introducing my readers to new writers and their books. If you are not already a subscriber to Carpinello's Writing Pages, please sign up with your email in the box located lower down in the right side bar. Also, be sure to enter the Giveaway at the end of the post.
Now, let's learn a bit about E. P. Bellows:
I’ve been writing (when I can) for 15 years!  Born and raised in California, I’ve always been an outdoor kinda gal. When I’m not tucked away behind a computer screen, being active and sporty (grew up playing soccer), and goofing off with my 3 kiddos is my cup of tea. Jedi = life, so any movie night that includes anything Star Wars is a good night… Jedi mind tricks are always welcome and encouraged.
I live in wine country and enjoy visiting the wineries for a splash and a good meal. If I can drag myself out of bed early enough, I catch the hot air balloons floating over the vineyards. They are cool!
I’m a decades long Charger fan - which is emotional torment – sadly. Football brings out the “crazy lady” in me, complete with foul language and arguments with the refs through the tele. 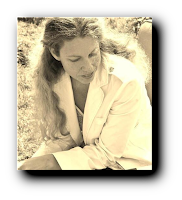 Why did you pick to write books for children?
Those are the stories I love to tell. My favorite kind of story has the prefect amount of adventure and magic. Of course, you have to have a fantastically flawed hero and “rotten to the core” villain.
What types of books do you like to read, and what do you do when you are not writing?
Books by the late Wayne Dyer, Neale Donald Walsch, and Deepok Chopra have inspired me. Treasure Island by Robert Louis Stevenson is a fantastic pirate tale. I love just about anything by Roald Dahl. I can't forget Tolkien and C.S Lewis for windows into some amazing worlds and characters.
Tell us about Bandits of Basswood and how the story came to be.
Bandits of Basswood is the prequel to Alexander Drake’s adventure. I had already written about Alexander (Alexander Drake’s Extraordinary Pursuit), Jonn William’s son. Bandits of Basswood builds out the back story for the guardians, Imperius and how the adventure really unfolded hundreds of years before. John William’s adventure begins with the mysterious disappearance of his father in Azra’s Pith. John William was determined to find him.
He had no idea what dark forces he was up against. He never imagined being captured by bandits and taken to a ship riddled with river rats was part of his fate. Not just any bandits – the Bandits of Basswood, known to be a ruthless and wild crew of thieves. Trying to escape would be a ridiculous idea. No one ever escaped and lived to tell about it. Uncovering traces of his missing father gave him hope and upped the stakes. John William was determined to get off the ship alive and search for the missing pieces of the puzzle. The chase out of Basswood was on.
Here's a peek at Bandits of Basswood: 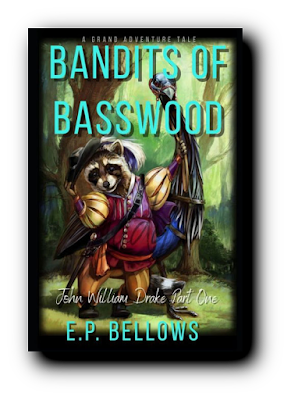 Celeste stiffened her posture. “Here is the plan; one of you needs to help me free myself from this tie before the hatch opens again. I will take on my bird form and fly out of here. They won’t even know what happened. Once I tell my dad, the guards will come to save you.” Her tongue hovered over her upper lip as she strained to free her hands.
Ferdinand frowned. “That’s your plan, is it? Marvelous! You are just going to flutter off in the dark of night? You don’t even know how far away from Verhonia you are. Nonsense! You’re not doing it!”

“Why can’t you turn to a bird with your hands tied? Then you could free yourself and unfasten my ties.” John William wiggled around on the bench.

“I could break a wing or something worse. I’m not willing to risk it.” Celeste replied.

“A lot of good having your hands free will do when you are locked in a cabin surrounded by bandits and river rats!” Ferdinand huffed.

The boat jolted suddenly, throwing the three of them off their seats. Celeste’s eyes lit up. She waved her hands around. “I did it!” she shrieked.

The drunken slur of a bandit came from the other side of the hatch. “I don’t want any foolery in there!” The hatch shifted and wiggled.

“Don’t worry,” Celeste whispered and smiled at John William. Within seconds, she was a beautiful red robin flying around the cabin. The hatch swung open and out she flew, nearly hitting the bandit in the face.

The bandit swung his arm. “What the – how did a bird get in here? Hey, you lazy lumps! Catch that bird; let’s boil it for dinner!” He laughed belligerently. The bandit reeked. He must have been saturated from head to toe with rum.

The bandit poked his head in and looked around. “Hey! Where’s the girl?” He stumbled inside, knocking ship tools and other small objects around with his tail.

John William and Ferdinand remained quiet, looking like they both swallowed the same canary. The bandit stood over John William, swaying with his hands on his hips.

“Well, where is the princess, wart? Did you help her escape?”

John William cleared his throat. “I, I don’t know what you are talking about.”

“Is that so?” The bandit pulled a knife from his belt with a taunting smile.

“She escaped,” Ferdinand blurted. “We tried to stop her, but she refused to listen. She went out the hatch and jumped overboard.”

“Impossible.” The bandit rubbed his fingers over his oily fur.

“Um, I believe I am Captain Vic’s supper.” The hopper stuck out his pudgy belly.

“It’s true! I heard the splash, myself,” declared John William, trying to take the focus off Ferdinand. The bandit examined their faces.

“Plunk – it sounded just like that,” said Ferdinand with a shaky laugh.

The bandit stormed out of the cabin. “The princess escaped! Get up, you twits!” He ran around the boat, banging his blade on an iron pot, making as much racket as one drunken bandit possibly could. The other bandits stirred.

Ferdinand shook his head with terror in his eyes. “We’re in for it now, boy….”

A healthy amount of my own wild imagination and watching my kiddos play gives me all the inspiration I can handle. The setting was inspired from a childhood of wandering through the woods around my grandmother’s house and bicycling to the creek to catch frogs. After reading The Lion, The Witch, and The Wardrobe by C.S. Lewis, I was forever in search of portals to magical worlds.

I have written five additional books in the Azra’s Pith Series. After a wild publishing ride they are all waiting in line to be revised and re-released. Quest for Copia will be the next book to be released (again). It is the sequel to Bandits of Basswood. A lot of questions are answered in this book and the story takes a heavy turn, so I’m taking my time on this one.

I want to have the entire Azra’s pith series out by the end of 2022. That is my main focus at the moment.

Persevere, have the patience of a Jedi, grow a thick skin, and learn from constructive criticism... did I mention persevere? I'm sure this goes without saying, but read and write as often as you can... even when you’re struggling and the writing looks like rotten bologna on a computer screen. If you hope to buy a latte or two with your royalties, the work begins when the writing is done... so be ready! Did I mention persevere?

I just want to say a huge thank you and send out a virtual hug to everyone. Thanks so much for having me here! I hope to see you all in Azra’s Pith!

GIVEAWAY
E.P. Bellows is giving away a summer goodie bag containing Azra's Pith swag! Goodie bag includes a coffee mug, tumbler, beach towel, paperback and kindle copy of Bandits of Basswood!
Terms & Conditions:
By entering the giveaway, you are confirming you are at least 18 years old.
One winner will be chosen via Rafflecopter
This giveaway ends midnight September 30.
Winner will be contacted via email on October 1.
Winner has 48 hours to reply.
Good luck everyone!
ENTER TO WIN!
Sorry, Rafflecopter isn't working here. Please go to PumpUpYourBook to enter.
Posted by ccarpinello at 14:19