First, a bit about Bobbi:

I was born in Ft. Worth, Texas, grew up in Grapevine (home of the DFW Airport), earned an art degree from U.T. Austin, lived there for years, and two years ago bought a 1930s cottage in Taylor, a small town northeast of Austin. I’ve been writing since I was very young---poetry, plays, short stories and lots of non-fiction. My main love, though, is writing fiction---especially anything funny or mysterious---or both.

Why did you pick to write books for Middle Grade Readers?

I’m not sure I made an active choice to write middle grade, but the kinds of quirky characters and humor that always seem to come out of my mind are well suited to that age group. I love that middle grade fiction doesn’t seem to have any boundaries in terms of strangeness, humor, crazy characters or situations, etc.

I love reading mysterious stories, stories of quirky characters in small towns or strange places. I love reading comedy, books with snappy dialogue and clever uses of words and word play, and I use a lot of that in my writing. I read a lot of middle grade fiction. I tend to like kid books like the Lemony Snicket series, Van Draanen’s Sammy Keye’s series and Ardagh’s Eddie Dickens Trilogy.  I’m also a big fan of Betty Ren Wright’s books.

I am an avid gardener, and tend ¼ acre of heirloom roses, herbs and vegetables and have designed a “critter garden” over the last two years since we moved here. We’re surrounded by birds, bees, butterflies, squirrels and the occasional neighborhood cat that enjoys my catnip. I also have six rescue cats of my own, and tending to them is sometimes a full-time job.

Tell us about Princess Primrose and the Curse of The Big Sleep, and how the story came to be.

Princess Primrose and the Curse of The Big Sleep was originally a stage play I wrote that won an award from a children’s theatre in Arizona. I decided to expand the story a bit and publish it as a book. One of my “things” is to spoof classic stories, and I thought it would be fun to mix a handful of different stories together—this time fairy tales and a detective story.  It seemed a natural since I primarily consider myself a mystery writer. Before long I’d visualized Rapunzel Rapunzel and Snow White as Inquiry Agents (detectives) who work with seven elves named Marlowe, Stealthy, Creeper, Nosy, Snoops, Sherlock and Gumshoe to solve crimes in their kingdom.

Here's a peek at Princess Primrose and the Curse of The Big Sleep. 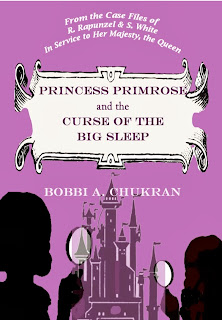 It takes a motley assortment of characters to solve the case of the Curse of The Big Sleep. There’s trouble brewing when Snitch, the Tattle-Tale Fairy, sets a crazy caper in motion when he tells a wicked witch that she has a beautiful niece, Princess Primrose. She puts a sleeping spell on the princess and the two detectives are hired to find an enchanted frog who hopefully can break the Curse of The Big Sleep. Who will save sleeping pretty Princess Primrose from Moribunda McEvil? R. Rapunzel and S. White, Inquiry Agents? Their seven helper elves, or Miss Slumberkins, a young witch who can only reverse spells---sort of? Or will it be Weasel the Wizard, with one of his special potions? Or perhaps there really is a prince in the motley assortment of enchanted creatures. Princess Primrose and the Curse of The Big Sleep is filled with quirky characters, snappy dialogue (and a happy, yet twisted ending). Anyone who believes in magic will love this fast-paced fairy tale spoof.

Yes, I’ve written lots of non-fiction, short stories and one historical mystery for adults, Lone Star Death. I’ve also written plays for youth theatre, and a DRACULA comedy spoof play, The Journal of Mina Harker. I’m an eclectic author, but most of my fictional stories do have the “all things mysterious” in common with each other. I also have a little e-booklet on cooking with herbs and spices.

Yes, I’m always working on something new. I’m making notes for a second book in the R. Rapunzel and S. White series and working on a series of short mystery stories.

Being an author, or writing a book, is never like you think it will be. It’s really, really hard work to keep producing, day after day, month after month, year after year. Yes, writing is fun, but it’s mostly hard work. You really have to be committed (in more ways than one! LOL) in order to make a career out of it. And these days, you have to be willing to do a lot of your own promotion and have the courage to get your work out there even when others reject it. Promotion of books really is a full-time job, and you have to carve out time to do the writing. Don’t be pressured into writing just one thing if you want to explore different types of writing. There are readers for anything you want to write. The hard part is finding them.

Where to find Bobbi and her books:

My published books are available on Amazon.com right now in e-book format for the Kindle (and in other formats in the future).  Princess Primrose and Lone Star Death are also available in paperback through Amazon.com.
Posted by ccarpinello at 21:00