Carpinello's Writing Pages is one of the stops for Colorado co-authors Janet Fogg & Dave Jackson on the MisFortune Annie Book Tour.

Dave released of Tattoo Rampage by Curiosity Quills Press in 2013. The novel follows Evangelina Marquez-James, a strong female heroine, who gets her first tattoo as a symbol of courage to carry on after her police officer husband dies in the line of duty. He performs stand-up and skits regularly, as Comedy remains one of his many passions and he writes and performs skits, as well as stand-up. Also a songwriter and guitarist, Dave has composed over 300 musical titles.


Misfortune Annie and the Locomotive Reaper 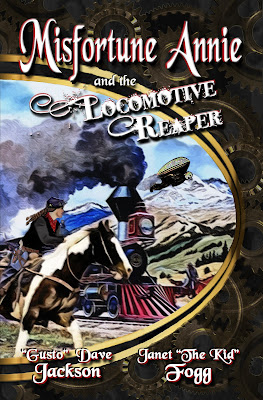 Enjoy this peek at MisFortune Annie and the Locomotive Reaper:

When Annabelle Fortune, the fastest gunslinger in the wild west, inadvertently stops a stranger from attacking a train -- and he wears a suit that enables him to fly! -- the government believes she's the only one to have witnessed the Locomotive Reaper and survived to tell the tale.

Promising to find out what he can about her missing father, the Director of the Secret Service persuades Annie to swear in. Too soon, her detested nickname re-stakes its claim.

Partnered with Beau Slokam, whose penchant for gambling leads them straight to the Doom Gang, Misfortune Annie guides the smooth-talking Southerner in a chase through the Rockies, with her Cheyenne friend, Wontoa, rounding out their unlikely trio.

When Annie again meets the Locomotive Reaper, his gadgetry proves far more advanced -- and deadly -- than even top scientists could have imagined.

A sequel is already underway! Visit Annie at MisfortuneAnnie.com for updates on release, as well as announcements regarding future books in the series!

About the authors and their writing partnership:

Q: Your protagonist was inspired by spitfire Annie Oakley, but what’s the full story behind your exciting middle grade adventure Misfortune Annie and the Locomotive Reaper?

Dave: To properly tell Misfortune Annie’s origin, we must first go back to the spark from a great machine. I make no bones about my awe of George Lucas and the Indiana Jones series. It’s widely known by most Lucas fans that the rugged archaeologist first showed up in spirit in old matinee serials until George tweaked him a little for a new generation of movie lovers. Indy’s trusty whip came from Zorro cliffhangers. So, hoping to scare up just anything that could give Indy a run for his money, I poked around in the same cinema of yesteryear and dug the cowboy genre. Roy Rogers, the Lone Ranger, Gene Autry—they were huge! So like Indy, my new star had to have a catchy name and signature duds. He was going to have a 10-gallon hat and Levi jacket.

I never got to name him though because fate threw in a wildcard that made me so grateful and stoked, I could never go back to the dude. On Christmas vacation one year, nearly sleeping behind the wheel through flat old Kansas, I passed a sign that boasted, “Annie Oakley Museum.” Jolted awake, I had my new hero. It would be a young lady known by a slick nickname.

Janet: We were chatting about his concept for Annie and what he wanted to accomplish with the book/series, and asked if I'd join him on that journey. Annie appealed to me for many reasons. First, because she was a young cowgirl struggling to excel in the man's world of the wild, Wild West. I really liked that. Second, because I thought we could weave subtle "lessons-learned" into the books, so that young readers, especially teen girls, would have a role model with strength, courage, determination, and strong morals.

What made you decide to co-write as a team on this series - and how is it collaborating on a book?

Dave: We didn’t collaborate. Like spoiled rich kids we fought, I tell ya. Nah, actually, the writer’s journey is very lonely, and I highly recommend brewing with another author, especially someone as tenacious, gracious, and creative as Janet.

Janet: Or as funny, talented, and kind as Dave. (Can you say mutual admiration society? It’s been a blast!)

Can you tell us more about the “Fun Facts” readers will find at the very back of the book?

Janet: We decided to incorporate some historic facts in each book, and the “Fun Facts” helps define certain facts versus fiction. One example is the waist overalls made by Levi Strauss that Annie wears. These were the original blue jeans, and in our Fun Facts a reader will learn that when they were first created by German-born businessman Levi Strauss and Latvian-born tailor Jacob Davis, blue jeans were actually called “waist overalls.” The duo received a patent for them on May 20, 1873, with a product that had one back pocket, a watch pocket, a cinch, and brace buttons. When a young reader reads this Fun Fact, we hope it inspires them to pause and consider the origins of other everyday items. Perhaps there are many young inventors out there, in need of inspiration and a nudge!

What is your favorite part of being an author/or the process of writing?

Dave: Hands down, it’s when I daydream of people reading our stories. After which, my imagination blossoms more to fans tossing me the keys to their Ferrari—and not to park it for them—then they offer to buy me, and Janet fried chicken dinners.

Janet: What Dave said. Plus, bending my imagination 90 degrees to somewhere. Inspiring a reader. Preserving history.

What does a typical work day of writing look like for you?

Dave: There is no typical. My days are maxed with tutoring my son in algebra, playing music gigs, performing stand up, an auditing occupation, planning a convention, exercise, my lovely girlfriend, and having a good time. I truly write due to my love for it because there’s no time otherwise. Because of odd predicaments, I’ve borrowed other folks’ computers and even typewriters to get something on the page. I’ve scrawled on napkins.

Janet: I've never been a good sleeper, so I sneak out of bed when the Great Horned Owls are still conversing. First, I check email. (Who doesn't?) While I used to work on manuscript drafts during those wee hours, now I work on my 359th FG posts or answer questions about the Fighter Group.  After breakfast I write new words. Then I'll edit—I can edit all day, but my brain begins to protest after writing three or four or pages of new words. That's another reason I love collaborating on stories!

Have you ever had a mentor, or someone who sparked your passion for writing?

Dave: Yoda, but Janet wound up being better.

Annie is such a trailblazer and great role model for young readers. What do you hope fans of the book will take away from the story?

Dave: Misfortune Annie and the Locomotive Reaper is the really good book you’ve been looking for. Also, I do want everyone to know that I learned to crack a whip just because of the Indiana Jones movies—which influenced Misfortune Annie’s creation).

What do you feel makes your book unique from other middle grade fiction out there?

Dave: The characters are peculiar, funny, and cool.

Dave: Yes, you won’t be able to wait for Book Two.

Ah! So speaking of book two, what’s next for Misfortune Annie?

Throughout the series, we will see more problems that Annie doesn’t get credit for because she’s a girl in a ‘tough guy’ world.

A long cast of colorful crooks (think James Bond’s bullies) is waiting to take on the fastest draw in the west. Book Two leads Annie to New Orleans and face-to-face with a wicked Voodoo priest. In another episode, the Dragon Warrior shall render her six shooters useless. A sinister magician will perform the ultimate trick on her and the Secret Service. Beware pirates! Look out for creatures in the woods, Annie! Not to mention cameos by historical figures like Wyatt Earp, Baby Doe Tabor, and Teddy Roosevelt—perfect walk-ons to spark curiosity about US History.


Where to find the authors: