Welcome to Carpinello's Writing Pages. This week brings more writing tips from our authors in addition to introducing a new author this week. You be amazed at where this author has spent the last 30+ years! But first, our writing tips. As always, be sure to leave your favorite tip in the comments for our readers/writers.

Writing isn't easy! It takes time and dedication, sometimes pushing you to the very edge. Keep working and find something that helps keep your mind in the writing zone so you don't get off track.  For me, it's different types of music or just speaking to my sister so I can bounce my ideas off of her...Alica Rivoli, author of the MG fantasy Mere Enchantment.

I think the most important thing is to make writing fun. You must enjoy what you’re doing to do it well. So take a subject you adore and write about it. Every day. Until you know it’s right. On days I don’t feel like writing, I read over the last few chapters and immediate I start to edit and rewrite; since I’m a bit of a perfectionist, that always gets me in the proper mood...J.C. Whyte, author of Karmac.

It helps to have a very thick skin and learn not to take rejection personally.

Also, write for the correct reasons. You need to write because it is your passion, not because you think it is a path to riches.

Make sure that your book is ready before jumping into the publishing process. Self-published books need to be professionally edited and of very high quality if you wish to compete with the mainstream books on the market. The book market has been flooded with masses of books in recent years and you really need to deliver a good quality product if you hope to achieve commercial success...Louise Lintvelt, author of Diary of a Dancing Drama Queen.

Here's a bit about Jess Frankel:

I was born in Toronto, Canada, a long time ago, and after graduating university with a BA (double major) in political science and English literature, I worked for a bus company for three years and then somehow ended up in Japan where I’ve lived for the past thirty-something years! I married a lovely lady from Osaka, we have two children, and I make my living by teaching ESL and writing at night. Some of my best known novels are the Catnip series, The Titans of Ardana, The Auctioneer, and Apocalyptia.


Why did you pick to write books for Young Adults?

I write both MG as well as YA, but stick to YA for the most part. I find that the genre itself is a very fast-moving one, something fresh and immediate, and it’s exciting. I can let my mind go free and travel anywhere. That kind of genre is practically limitless in what you can write about.


What types of books do you like to read, and what do you do when you are not writing?

When I’m not writing, I watch movies—big superhero fan—and listen to various kinds of music to relax. That’s about it.

Tell us about Apocalyptia and how the story came to be.

Apocalyptia is a YA thriller about the discovery of a computer code that could trigger Armageddon. I wrote it because these days, everything is done by computer, and while they don’t control our lives, they play an integral part in them. Cyber warfare is nothing new, and taken to extremes, it can spell disaster. That’s what I wanted to explore.

Here's a peek at Apocalyptia:

An unreadable code. A secret too big to keep. An idea people will kill for. 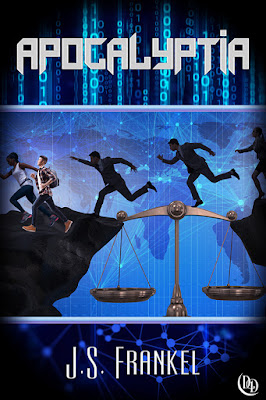 Ed Sawyer, seventeen, is one of those ignored types at his school. A nerd hopelessly obsessed with all things cinematic, he lives for his next flick. He’s matched by Linda Usher, a classmate who is also into movies, as well as computer coding and hacking.

On the last day of school before summer vacation, Ed is given a flash drive by a dying man. He sees a code on it, and Linda, for all her genius, can’t decipher it, either. They are soon pursued by not only domestic terrorists—ex-members of the Department of Defense—but also by Russian agents who are after the same thing.

It seems that the creator of the program, Harry Haskins, devised it as the ultimate smart bomb, the ultimate tool for controlling the internet and every single computer program around, including those of defense.

It’s a secret that the wrong people will kill for, and Ed and Linda have to go on the run from those who would capture and kill them—and that includes citizens as well!

Only Linda has the knowledge to prevent such a catastrophe from happening. The only question is whether the duo can remain alive long enough to deliver the goods to the right people.

I read a lot of different articles on the Internet, and then, if I don’t know, I ask those who do. For fantasy, I rely on my own imagination, but for real-world things such as computer programs, medicine, certain diseases and their symptoms, research is integral. I’ve found that readers will forgive you for certain lapses in narrative or inconsistencies in plot, but if you make a mistake on something technical, they’ll definitely call you on it!

I’ve written about thirty-five other novels. Many of them deal with aliens, alien worlds, have lots of action and some romance. I don’t see why a writer can’t combine action and romance in a story and do both aspects well.

Some of novels, as mentioned above, are Catnip, which deals with transgenics, monsters, mad scientists, and so on.  Master Fantastic is all about elemental magic. The Associate, its sequels, The Sindicate, and Stand-In, are all about superheroes, but not written in a conventional way. A little twist here and there makes them special! Check ‘em out, please!

Right now, I’m working on a story about a young man going blind who develops psychometric powers—the ability to ‘read’ impressions from objects he touches. I finished it the other day, and since it’s just the first draft, it’s all very rough, but I’m having fun with it.

As trite as it sounds, I’d say write with your heart, edit without one, and be as objective as possible. Also, don’t let rejection get you down. I was rejected over a hundred times before someone took a chance on me. I’m not famous or wealthy—darn—but I am productive, and I have hopes that my books will increase in their popularity.

Just that I’d like to thank you, Cheryl, for allowing me this interview. Also, I hope that readers will take a chance on someone who’s not a big name but who writes a good story that is entertaining as well as informative.